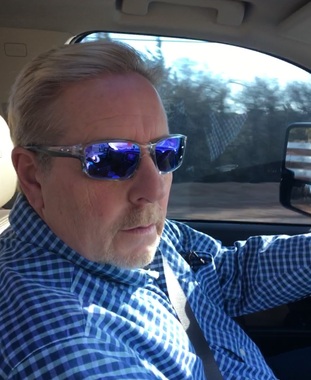 Back to Terry's story

Terry K. Davis, 64 year old Woodward resident, passed away Saturday, January 11, 2020 at the Alliance Health Woodward. Funeral services will be held at 2:00 p.m. Friday, January 17, 2020 at the Living Word Fellowship Church. Burial will follow in the Elmwood Cemetery. Arrangements are under the direction of the Billings Funeral Home.

Terry Kent Davis was born on March 10, 1955 in Coldwater, Kansas to Joseph Lavern and Doris (Smith) Davis. Terry attended grade school in Pratt, Kansas before the family moved to Woodward when Terry was in the 9th grade. He graduated from Woodward High School in 1973. He attended Northwestern Oklahoma State University. He was united in marriage to his high school sweetheart, Sidonna Gayle Warren on July 28, 1973 at the First Christian Church of Woodward. They made their first home in Woodward and have lived here since that time.

During his school years, Terry worked at the Green Stamp Store and Fannys Fina and during the summers he worked for Howard Way Chevrolet in Fairview. He later worked for Fenimore Manufacturing before going to work for Woodward Iodine in July of 1976. He worked his way up in the company and was currently a Executive Vice President.

Terry loved being with his family, especially his children and grandchildren. He and Sidonna loved traveling and they wanted to travel to all 50 states, they almost completed that. He enjoyed going to car races and he and Sidonna were lap counters at the Woodward Track and Beaver. One of his favorite places to go was his property west of Woodward where he spent time with his family and friends and he always enjoyed working out there. Terry also enjoyed fishing and horse back riding. He was a member of the Woodward Education Foundation, was a board member for Woodward Iodine, and served on the Northwest Literacy Council for several years.

He was preceded in death by his dad, Joseph Davis, one brother Jim Davis and sister Marilyn Davis.

Remembrances may be shared online at www.billingsfuneralhomewoodward.com
Published on January 14, 2020
To send flowers to the family of Terry Kent Davis, please visit Tribute Store.

Send flowers
in memory of Terry

A place to share condolences and memories.
The guestbook expires on April 13, 2020.

Your family is in our thoughts and prayers. So sorry for your loss.

In the early 1980's when the Iodine plant was sold to the Japanese, Terry asked me to take this golf class in the evening with him at the Woodward course during the summer after work. You see a lot of the Japanese loved golf and Terry was savvy enough to know he better learn this sport.

We both found out that year we both hated golf. Terry used to comment that he "worked golf" and not "played golf" because it felt like work.

He wanted me to play in the foursomes however because while he may not have been a great golfer, I was absolutely terrible. Having me on his team made him look a lot better. ;-)

Terry had the greatest sense of humor. It was a plea...sure to work under him on my summers home from college as a roustabout "t-hire" out there.

Whatever plans for heaven he will do up there, I am pretty sure it won't involve golf.Read more
Leo
My condolences. I've had the opportunity and pleasure to work with Terry on and off over the last 3 decades. He was always willing to help and our conversations always started with personal discussions relating to family, friends, and life before getting to the business part. He truly was a wonderful person and will be missed.
Wendy Oates
I'm so sorry for your loss. I wish I could have done more to help you. You are and Will remain in my prayers.
With love,
Wendy Oates
View all