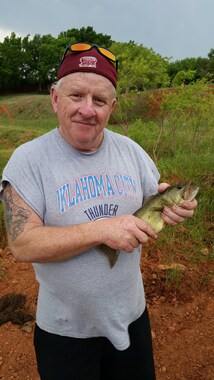 Back to Scott's story

Scott Clanton, 53 year old Altus resident and former Woodward resident, passed away Wednesday, January 29, 2020 in Altus. Funeral services will be held at 2:00 p.m. Monday, February 3, 2020 in the Billings Funeral Home Chapel with Reverend Eddie White officiating.
Interment will be at 4:30 p.m. at the Sayre Doxey Cemetery in Sayre, Oklahoma.

Scott Russell Clanton was born on July 25, 1966 in Okmulgee, Oklahoma to James Edward and Lena Mae (Kemp) Clanton. He grew up in southwestern Oklahoma, attending school in Altus and Granite. Scott graduated from Granite High School in 1985. He worked in the Oil and Gas industry as a Coil Tubing Supervisor for QES Energy Service in Elk City. He had worked for Cudd, C&J, and Key Energy Services prior to that.

He loved spending time with family and friends and being outdoors. Scott also enjoyed fishing. He loved his family and will be missed by all.

Scott was preceded in death by his brother, Bud White and son Joshua Clanton.

Remembrances may be shared online at www.billingsfuneralhomewoodward.com
Published on January 31, 2020
To send flowers to the family of Scott Russell Clanton, please visit Tribute Store.

Send flowers
in memory of Scott

A place to share condolences and memories.
The guestbook expires on April 30, 2020.

Simply Elegant Spathiphyllum was purchased for the family of Scott Russell Clanton by The O'Handley's.  Send flowers