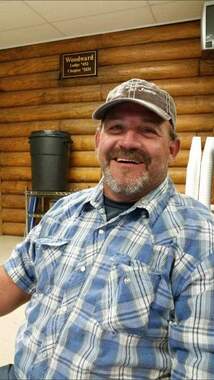 Back to Leonard's story

Wayne Hayes, 51 year old Woodward resident, died Thursday, January 9, 2020 in Duncan, Oklahoma. Funeral services will be held at 10:00 a.m. Wednesday, January 15, 2020 at the Ft. Supply Baptist Church with Reverend Todd White officiating. Burial will follow in the Fairlawn Cemetery. Arrangements are under the direction of the Billings Funeral Home.

Leonard Wayne Hayes was born on December 8, 1968 in Buffalo, Oklahoma to Leonard Ernest "Poncho" and Crystal June (Grace) Hayes. Wayne grew up in Ft. Supply and attended Ft. Supply Schools. He went to work in the oilfield and worked for Tommy Weder for over 30 years. He was united in marriage to Lisa Ruttman on June 1, 1997 at Boiling Springs State Park. They made their first home in Woodward before moving to Ft. Supply and back to Woodward where they have lived for years.

Wayne loved his family, especially his grandkids and he enjoyed going on vacations with all the kids. His favorite time was family time, his whole world was wrapped around his wife and kids, including all the extended kids in his life. He enjoyed shooting guns, going to the dunes and camping. Wayne was a member of the Ft. Supply Fire Department and later the Sharon Fire Department.

He is survived by his wife, Lisa Hayes of the home; sons: Justin Hayes and fiancé Shaylee Darr, Michael Hayes and girlfriend Katie Gardner; daughters: Kasey Hayes and boyfriend Dawson Springer, Lasey McIntosh and husband David; one sister Teresa Hayes Lancaster and husband Britt; three grandchildren: Tinley Hayes, Rider McIntosh, and one on the way Roper McIntosh; other relatives and many friends.

He was preceded in death by his parents, Leonard and Crystal Hayes and his uncle Arthur Grace.

Memorial contributions may be made to the Sharon Fire Department with the funeral home accepting the contributions.

Remembrances may be shared online at www.billingsfuneralhomewoodward.com
Published on January 13, 2020
To send flowers to the family of Leonard Wayne Hayes, please visit Tribute Store.

Send flowers
in memory of Leonard

A place to share condolences and memories.
The guestbook expires on April 12, 2020.

Roy carbajal and family
He was a good man met him when he worked with my husband at poly pipe construction.he has a sweet wife and family.prayers and condolences.to his family.god bless.
View all