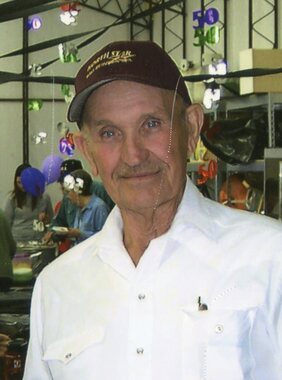 Back to Leon's story

Leon Pingry, 85 year old Woodward resident, died Monday, July 29, 2019 in Woodward. Graveside memorial services will be held at 10:00 a.m. Monday, August 5, 2019 at the Elmwood Cemetery with Reverend Janet Fitz officiating. Burial will follow with the Billings Funeral Home in charge of arrangements. Military rites will be conducted by the United States Navy.

Lawrence Leon Pingry was born on July 6, 1934 in Ralston, Oklahoma to Leo Clair and Evelyn Lucille (Petty) Pingry. He grew up in Ralston and attended school in Kaw City, Oklahoma. He received his GED while in the United States Navy. Leon was inducted into the United States Navy in 1951. He served his country during the Korean War and received the National Defense Service Medal, the United Nations Service Medal, and the Korean War Medal with one service star. He was honorably discharged in 1955. While in the Navy, Leon received his Diesel Engineering and Engineering Certification which he continued to use as his employment skills. He worked various jobs before retiring as a Boiler Plant operator at Ft. Sill in 1988.

He was united in marriage to Carolyn Scott on December 31, 1985 in Wichita Falls, Texas. They made their home in Lawton. Leon enjoyed hunting and fishing with family and friends. He also loved visiting with anyone who stopped by his workshop for hours.

Leon was a member of the Masonic Lodge and he was dearly loved by his family and will be greatly missed.

Leon was preceded in death by his parents, Leo and Lucille Pingry, his wife Carolyn and a brother Harold Pingry.

Remembrances may be shared online at www.billingsfuneralhomewoodward.com
Published on August 1, 2019
To plant a tree in memory of Leon Pingry, please visit Tribute Store.

Plant a tree in memory
of Leon

A place to share condolences and memories.
The guestbook expires on October 30, 2019.