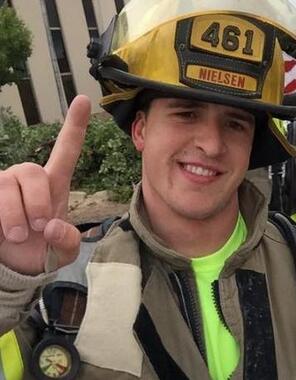 Back to Joshua's story

Joshua Glenn Nielsen, eldest child of Jimmy Eugine and Lisa Dean (Woods) Nielsen and brother of Caleb and MayKenzie Nielsen was born May 7, 1992 at Elk City, OK. He completed his earthly journey on April 2, 2019 at the age of twenty-six while residing in Olathe, KS.
Josh, as he was fondly known, grew up in the Sharon, OK. community and received his education in the Sharon-Mutual school system. A competitive athlete, he played basketball, baseball and football and was a member of the track team winning the State Championship in the one and two mile relay event. Josh played baseball with the Woodward Travelers, basketball in the K101 Classic Bowl, participated in the eight man football All Star game and was a member of the Academic team and FFA trap shooting team. He graduated from Sharon-Mutual high school with the class of 2010.
Following graduation he was employed at Hibbetts sports store in Woodward, OK. and at the Woodward County Sheriff's Department. In 2012 his 'dream job' of being a fireman became a reality when he began as a volunteer with the Woodward Fire Department. He achieved full time fireman status in November of 2014 and also worked part time at Compass Athletics in Woodward, OK. He took part in the Oklahoma City 911 Memorial Stair Climb and the Oklahoma City Memorial Marathon with his fellow fireman. He resigned his position in 2018 to relocate to Olathe, KS. where he attended Johnson County Community College and worked part time at Hy-Vee Grocery as a butcher.
On December 22, 2012, Josh was united in marriage to Jessica Reynolds at the First Christian Church in Woodward, OK. A son, Callen James, was born to this union.
Josh enjoyed hunting and fishing and was an avid fan of the Kansas City Chiefs and Royals. He was a serious collector of autographed sports memorabilia, his prized possession being a replica Heisman trophy with the recipient's signatures.
Not one to be idle, Josh was passionate about helping and caring for others and was a faithful blood donor. He was a baptized member of the South Persimmon Baptist Church at Sharon, OK., later transferring his membership to the First Baptist Church in Woodward, OK.
Josh is preceded in death by his grandparents, Lee and Uleta Nielsen and Helen Woods. His memory is lovingly cherished by his parents, Jimmy and Lisa Nielsen of Sharon, OK. and his son, Callen Nielsen of Woodward, OK. His brother, Caleb Nielsen and daughter, Rylee of Crain, TX., his sister, MayKenzie Nielsen and daughter, Hazely of Shattuck, OK. and his grandfather, Bobby Woods of Oklahoma City, OK. Bennett James Hunt of Oklahoma City, OK. and Courtney Shillington of Enid, OK., numerous aunts, uncles and cousins and a host of friends.
Services were held Tuesday April 9, 2019 at 10:00 am at the First Baptist Church, Woodward, OK with burial following at South Persimmon Cemetery, Sharon, OK. Condolences may be made to the family at shawfuneralhome.net. Shaw Funeral Home of Vici
Published on April 8, 2019
To plant a tree in memory of Joshua Glenn Nielsen, please visit Tribute Store.

Plant a tree in memory
of Joshua

A place to share condolences and memories.
The guestbook expires on July 07, 2019.