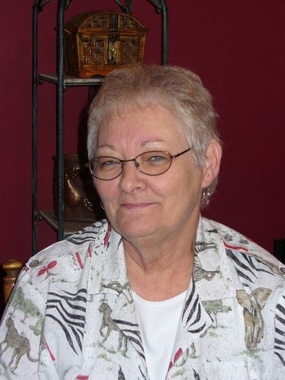 Back to Josephine's story

A celebration of Life Service for Josephine Ann "Jody" (Leach) Hamilton, age 72 of Oklahoma City formerly of Woodward will be at 1:00am Saturday March 30, 2019 St Anne's chapel in the St. Anne's Nursing Home in Oklahoma City with Father Grimes officiating. Burial will follow at the Bison Cemetery.
Jody was born on September 6, 1946 in Woodward, OK to Clarence and Nadine (Walker) Leach and passed away Sunday, February 17, 2019. She attended Woodward Public Schools. She married Dan Hamilton, the love of her life, on April 3, 1964 in Woodward. To this union, three children were born Kenneth Andrew, Robert Austin, and Travis Anthony.
Jody worked as the bookkeeper for Dan's Welding for many years and later worked for several merchants around Woodward. She was a House Manager for OARC where she retired.
Her favorite pastimes were sewing, crafts, cooking, gardening, garage sales, and bargain shopping along with spending time with her boys and family. Grandchildren had an open invitation at Grandma Jody's house, and each grandchild had a special bond with her.
She is survived by her children, Kenneth Hamilton and Keela, Robert Hamilton and wife Erika, and Travis Hamilton and wife Lisa. She also claimed many other "children" who called her Mom. She is also survived by eight grandchildren, Melissa Bowersox and husband Zach, Martin Hamilton, Dan Hamilton and wife Jessica, Tylan and Kaston Hamilton, Alice, Matt, and Maren Hamilton, and a sister Gayle Larson. She also had nine great grandchildren and many others that called her "Grandma Jody". Jody also had nieces, nephews, and many cousins that were very special to her heart.
Jody was preceded in death by her parents, step "mom" June Leach Russell, a sister Shirley Leach, and sister Bobbie Hampton.
In lieu of flowers, memorials may be made to the March of Dimes, Special Olympics, Oklahoma City Scouts BSA Troop 162, or the Bottineau ND Scouts BSA Troop 528.
Published on March 6, 2019
To plant a tree in memory of Josephine Ann Hamilton, please visit Tribute Store.

Plant a tree in memory
of Josephine

A place to share condolences and memories.
The guestbook expires on June 03, 2019.