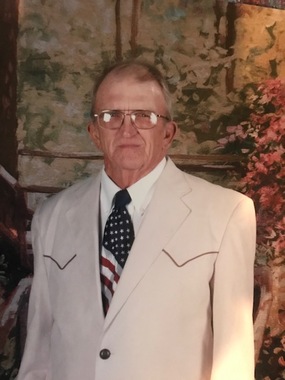 Back to John's story

Mr. John Charles Lyon, son of the late Harold and Charlaine Bleckley, was born on June 2, 1942 in Woodward, Oklahoma. He attended the public schools of Woodward and was a graduate of Woodward High School in 1959. At an early age, he attended Lincoln Avenue Baptist Church where he was baptized and a dedicated member.

He was united in holy matrimony to Angie Raye Moore on August 4th, 1978. This union was blessed with two children.

John enjoyed fishing, bowling, cards and shooting sports. He was very active in his community helping with numerous Hopkins Thanksgiving dinners as well as various food drives. He was a member of ATA, NRA and the local Moose Lodge where he spent a lot of time with friends. John retired with honors after 31 years in the Army National Guard and 28 years of service for the State of Oklahoma. After his retirement he helped his friends at Leroy's Ready Mix and Zirby Enterprises.

As a result of his generous spirit and pleasant personality, John was loved by many and his influence will forever remain in the lives of all who knew him. He quietly departed this life Monday, February 3rd, 2020 at 9:13 p.m. at his residence surrounded by family and friends. He was preceded in death by his parents, and brother, Jerry Lyon.

Survived by one son, Dustin Lyon of Woodward, Oklahoma and one daughter, Dacia Gonser of Buffalo, Oklahoma and 3 grandchildren, Jakoby Carter, Kaleb and Chloe Gonser.

Survived by one brother, Lee and wife Arlene Lyon of Woodward; sister Carol and husband Dallas Peil of Woodward; and a host of devoted nieces, nephews, cousins and friends.

Graveside Service will be held at 11:00 a.m., February 14th, 2020 at Elmwood Cemetery. Dinner will follow at the Woodward Moose Lodge.
Published on February 8, 2020
To send flowers to the family of John Charles Lyon, please visit Tribute Store.

Send flowers
in memory of John

A place to share condolences and memories.
The guestbook expires on May 07, 2020.

Glenda & George Gonser
Dallas & Carol, Dacia, Jakoby, Kaleb and Kloe, so sorry for the loss of your brother, father, and grandfather, our sympathies.
Randy and Judy Toney
So sorry about your dad he was a really super guy and will be sorely missed
Karen Fields
John and I worked together many years. He was always fun to work with and was so good to our clients. They could sweet talk him into doing about anything
Dr. Don Rhudy
Dustin and Dacia, I knew John as Lee's little brother and a really nice little kid, and years later as a fine man. You can be very proud of him. Not everyone has a father as loving as your pop.
Dutch Schneider
I am going to miss my life long friend and fellow soldier. John had one of the biggest hearts of anyone I have ever known. If you were his friend, it would be for a lifetime. I cherish the times we shared together in school and as members of the Oklahoma Army National Guard. Rest in peace Soldier!!
Patti Herman Hunter
He was a wonderful man. Worked with him 23 years would do anything for anyone. Do some fishing in the sky.
George and Tanya Springer
Carol and Dallas,
Heartfelt condolences on the loss of your brother John. May your faith help comfort you in this difficult time.
Elaine Adams

You have my deepest sympathy. John was a WONDERFUL man whom I will always remember as being a fun-loving bowler. He was always nice & polite to everyone at the bowling Alley. Prayers for the family and friends.

Ben Travis
John was a very good friend. He was a man of integrity and I will miss him.
Bonnie. Castor
John was a great man and had a bigger heart. Many years ago John was a member of my Sunday school class. You could always count on John for wise words. I remember once, we were talking about, should you make you kids go to Church? John said, “you make them get up and go to school don’t you?, I believe church is just as important.” His words were words of wisdom. John was a fine man and I loved being in his presence. He will be missed. Prayers for the family. You were blessed.
View all