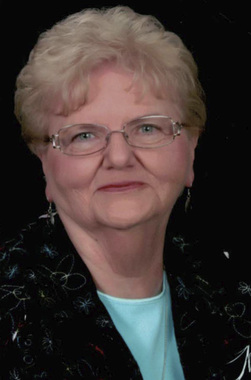 Back to Jo Anne's story

Jo Anne (Salz - Dike) Andra, 83, formerly of Woodward, retired Human Resources Manager, died Thursday, February 6, 2020 at her residence in Goddard, KS. Rosary will be recited at 7:00 p.m. Monday, February 10, 2020 and Funeral Mass will be celebrated at 10:30 a.m. Tuesday, February 11, 2020 both at The Church of the Holy Spirit, Goddard, KS with Father Matthew Marney as Celebrant. Interment will follow in Resurrection Cemetery, Wichita, Kansas. Arrangements are by Ebersole Mortuary, Conway Springs. Online guestbook and condolences are available at www.ebersolemortuary.com.

She was born May 23, 1936 near Woodward, Oklahoma, daughter of Joseph J. and Anna (Loch) Salz. She was a graduate of Woodward High School and Marymount College of Kansas in Salina, Kansas.

Jo Anne taught business subjects at Goddard High School and in two Wichita business colleges. Later a medical secretary for two ENT physicians and then joined Western Electric/AT&T in human resources department in 1975. After the company closed, she worked for Rubbermaid and Ameri-Kart also in Goddard retiring in 1999.

Jo Anne and Dave were charter members of The Church of the Holy Spirit, Goddard, where Jo Anne served six years on the first Pastoral Council. She was a long-time member of the Associates of the Sisters of St. Joseph of Wichita and served on the Associate Advisory Board and received her 30-year recognition in 2018. A long-time member of Midwest Genealogical and Historical Society of Wichita and had a lifelong love of family history and researched many family lines and complied printed histories for the Andra and Armour lines and her own family lines, Salz, Loch and Dike. As a result, she enjoyed the relationships and contacts with extended family members. She was also a member of the Prairie Quilt Guild of Wichita and enjoyed making things for her children, grandchildren and great-grandchildren. Through the years she also planned many reunions for family, college classmates and former co-workers. She was also an avid photographer concentrating on her grandchildren and family events.

She was preceded in death by her parents and both husbands.

A place to share condolences and memories.
The guestbook expires on May 07, 2020.

Mary Ann Hilger
Steve I was sorry to hear about your mom. Many years ago she and I took classes together to become certified medical assistants. I have always remembered her and her fun personality. You must have many wonderful memories
View all