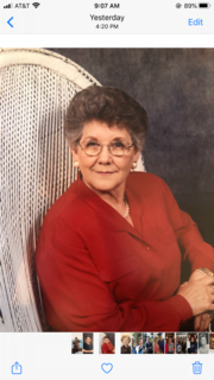 Dean Lochman, 84 year old Woodward resident, passed away Friday, January 31, 2020 in Enid. Funeral services will be held at 2:00 p.m. Thursday, February 6, 2020 at the First Assembly of God Church with Reverend Brad Smith and Reverend Seth Cash officiating. Burial will follow in the Elmwood Cemetery. Arrangements are under the direction of the Billings Funeral Home.

Gloria Dean Shirley (Pace) Lochman was born on May 24, 1935 in McAlester, Oklahoma to Floyd Arthur and Eva Opal (Smith) Pace. Dean grew up in Enid and attended Enid schools. Dean was united in marriage to Eugene Lee Lochman on July 5, 1963 in Enid, Oklahoma. They made their first home in Enid where Eugene worked at Vance Air Force Base. The family moved to Owasso in the spring of 1967 and in 1969 they moved to San Diego, California. In 1975 they moved to Fargo, where Dean worked at the Fargo schools in the cafeteria. They moved to Yucaipa, California in 1987 and Dean ran the office at Eugenes sheet metal business. After Eugenes death in 1989, Dean moved back to Woodward to be closer to her family and she has lived there since that time. In the early 1990's Dean worked as a Bookkeeper for Hayter Cattle Company until her retirement. After her daughter Evie got sick she took care of her grandson Alex.

She was a member of the First Assembly of God Church. Dean loved spending time with her children, grandchildren, and great-grandchildren. Her church and Monday night Prayer group was very special to her. She was a member of the Woodward Hospital Auxiliary and volunteered at the Chemo clinic at the hospital for the past 20 years, where she touched many lives. Dean enjoyed oil painting, genealogy, gardening and cooking and baking for friends and family.

Dean was preceded in death by her parents, Floyd and Opal Pace of Enid, brothers: Billy Pace of Rhode Island and Richard Yvonne Pace who died as an infant. sister, Darletta Walton of Oregon, nephew, Michael Walton of Oregon, daughter Evie Matthews of Woodward, and son-in-law, Steve Reed of Iowa.

The family suggests in lieu of flowers, memorial contributions may be made to the First Assembly of God Church Kenya Missions where it will be used for the mission school where people can receive schooling and furthering the gospel. This is where Deans pastor, Reverend Brad Smith goes every year.

Remembrances may be shared online at www.billingsfuneralhomewoodward.com
Published on February 3, 2020
To send flowers to the family of Gloria Dean Lochman, please visit Tribute Store.

Send flowers
in memory of Gloria

A place to share condolences and memories.
The guestbook expires on May 03, 2020.

sharon larkey
Such a wonderful person. she was with me in my husbands room. after the doctor left Dean put her cheek next to Darrells and said Jesus is here to take you home. He took his last breath and went home with Jesus. She is truly an angel and I hope Darrell sees her again.
Laura Mize LPN

I didn't know her long, but it didn't take long to know she was a special lady. She will forever hold a special place in my heart. Sending love and prayers for the family.
Until I see her again.......