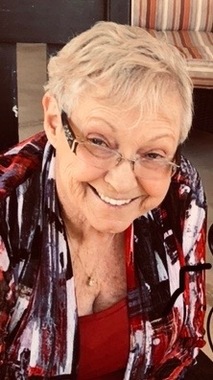 Gloria Jeter, 77 year old Woodward resident, passed away Tuesday, February 4, 2020 in Buffalo. Funeral services will be held at 2:00 p.m. Saturday, February 8, 2020 at the First Baptist Church of Woodward with Reverend Jeff Barros officiating. Burial will follow in the Elmwood Cemetery. Arrangements are under the direction of the Billings Funeral Home.

She was a member of the First Baptist Church and loved working in the nursery taking care of the babies. She served on the Hospitality Committee at the church, cooking dinners for all occasions. Gloria loved her family and enjoyed spoiling her children and grandchildren. Besides being with her family she enjoyed reading, working on puzzles, and crocheting.

Gloria was preceded in death by her parents, brothers: Carlas, Jerry Lee, and Ronald Bell, one sister, Shirley and her loving husband Don Jeter in 2013.

Memorial contributions may be made to the First Baptist Church with the funeral home accepting the contributions.

Remembrances may be shared online at www.billingsfuneralhomewoodward.com
Published on February 5, 2020
To send flowers to the family of Gloria June Jeter, please visit Tribute Store.

Send flowers
in memory of Gloria

A place to share condolences and memories.
The guestbook expires on May 05, 2020.

Mary Klentz
Gloria has been on my mind recently. I decided to Google her name and found she just passed. I'm so sorry for your loss. I'm happy to have been a part of her life.
View all