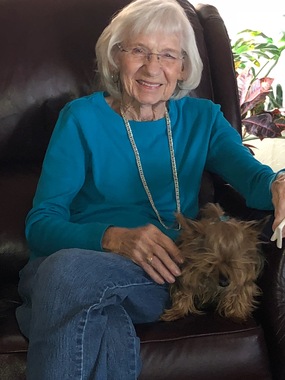 Gloria Faye (Critchlow) Hill was born to Earnest and Mary (Stoughton) Critchlow on January 1, 1938, north of Slapout, OK. Gloria was the youngest of 7 children. Having several older brothers and one older sister, she acquired the nickname Shorty and her classmates called her Glo. She had a feisty spirit and when she was young she was such a Tom boy; her daddy's fishing buddy, could care less about her hair and clothes or a messy room, no matter how hard her mother tried. She wore the pretty dresses to Sunday school; and church, but the rest of the time it was jeans.
Gloria attended school in Follett, TX. At 12 years old, she was outside mowing one day and she told her mother that she didn't feel well. She was diagnosed with Polio and the doctors said she would probably never walk again. Feisty Gloria proved them wrong! She started crawling on her elbows to get around; even to get to class. She was loaned a horse and her mother told her to get out there and ride with her friends. Riding bareback strengthened her leg muscles, which led to her playing on the A Basketball Team for Follett High School. She was also active in volley ball, band, chorus, pep squad and FHA.
In 1953, Gloria met this boy from Darrouzett, TX; his name was Ldeen Hill. She really wasn't interested in dating him, but he finally talked her into a double date. Gloria and Ldeen fell in love and were married February 26, 1954, in Clovis, NM. She was 16 and he was 19. Ldeen then joined the Army and was a medic in Germany for three years, while Gloria finished high school and graduated from Follett in 1956.
In 1957 Ldeen was employed by Sun Gas Company in Colorado City, TX. When she married Ldeen, her family had never seen such a change! She was no longer the Tom boy; she was always fixed up, her house was so clean and she blossomed with all of her mother's talents...housekeeping, cooking, sewing, crochet and knitting. Their daughter, Linda Faye (Hill) Schwinn, was born June 13, 1958. Ldeen transferred to the Sun Gas plant in Laverne to be closer to family. Their son, Randel Deen Hill, was born October 29, 1960. While Ldeen's career was with Sun Gas for 41 years, Gloria was a house wife and babysat other young children. Later on she was employed as a teacher's aide at the grade school in Laverne and then a legal secretary for Bill Armor, Attorney.
Ldeen and Gloria purchased a lot and mobile home at Ft. Supply Lake in 1965 and enjoyed spending time with family and friends there for many years. Gloria and Ldeen were on bowling teams, played Bridge, and took country dance lessons and enjoyed many years of dancing, traveling, going to auctions and collecting dishes; however, most of all they loved being grandparents. Ldeen and Gloria continued with the Hill wheat crop in Lipscomb, TX, for several years, after Ldeen's parents were older and passed. In 1999, a year after Ldeen retired from 41 years with Sun Gas, he was stricken with cancer and passed away three weeks after he was diagnosed. Despite her grief, Gloria, with the help of her grandson, Kyle Taylor, took care of harvesting 1999 wheat crop. Gloria continued to be the rock for her family and she filled her time with them. She moved to Woodward in 2011, across the street from Kyle and Jeanne, and also had Linda and Lyman seven minutes away. She enjoyed completely re-landscaping her front yard and it remains as beautiful as it was then. Sadly, Gloria faced another tragedy, the passing of her son, Randy (Randel), in 2011. Again, she was strong and carried on. Gloria developed COPD which gradually worsened the last three years and Linda and Lyman had to make the tough decision as caregivers to move her to her new home at Mooreland Heritage Manor, Mooreland, OK, on December 18, 2019, where she thoroughly enjoyed the friendship of the nursing staff and residents. Gloria celebrated her 82nd birthday on January 1, 2020. The following day she fell and fractured her hip, which led to a hip replacement; the only surgery of her life. She persevered, without complaining, but our Lord called her home on January 21, 2020.
Gloria is survived by her sister, Goldie Bruce, of League City, TX; Linda and Lyman Schwinn; grandson, Kyle Taylor, and wife, Jeanne, and great-grandchildren, Jaxson and Adley Taylor, Hobbs, NM; grandson, Kalon Taylor, Tulsa, OK, granddaughter, Erika (Hill) Ruiz, and husband, Anthony, and great-grandson, Jace Ruiz, of Pampa, TX, and granddaughter, Carly Hill of Ponca City, OK. She is also survived by her niece, Debra Brady, and family, of League City, TX; nephew, Michael Bruce, of Anthony, KS; nephew, Ronald Critchlow; niece, Lawanda Lucido, and husband, Dennis, and family; niece, Beverly Hoben and family; and several loved cousins on the Stoughton side of her family.
Memorials can be made in Gloria's name to the Laverne Fire Department PO Box 1222, Laverne, OK 73848 or Laverne Golf Course PO Box 441, Laverne, OK 73848.
Funeral service will be held at the Laverne Funeral Home Chapel in Laverne, OK, Saturday, January 25, 2020 at 2:00 PM interment will be at the Lipscomb Cemetery in Lipscomb, TX.
Arrangements made by the Laverne Funeral Home. Condolences can be made at www.schillingfhg.com.
Published on January 23, 2020
To plant a tree in memory of Gloria Faye Hill, please visit Tribute Store.

Plant a tree in memory
of Gloria

A place to share condolences and memories.
The guestbook expires on April 22, 2020.