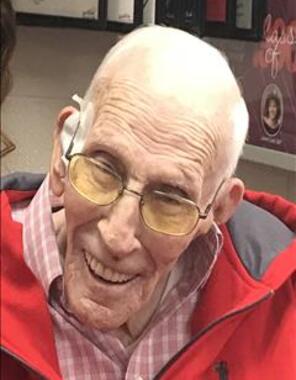 Back to Cecil's story

Cecil R. Mitchell, 102 year old Forgan resident, passed away Thursday, July 11, 2019 in Beaver. Funeral services will be held at 2:00 p.m. Wednesday, July 17, 2019 at the United Methodist Church in Forgan. Burial will follow in the Forgan Cemetery with the Laverne American Legion providing military graveside rites. Visitation will be at 10:00 a.m. until service time on Wednesday at the church. Arrangements are under the direction of the Billings Funeral Home.

Cecil Robert Mitchell was born on February 7, 1917 near Booker, Texas to Ralph and Verda (Headrick) Mitchell. When Cecil was five years old his family decided to load up the covered wagon and head to Forgan, Oklahoma. After some difficulty and the wagon getting stuck in the Cimarron River, his family was able to make it to their destination. He grew up in Forgan and graduated from Forgan High School in 1934. Cecil went to work for the Natural Gas Pipeline in Stinett, Texas at the Compressor Station after graduation. He was inducted into the United States Army on October 1, 1942. He proudly served his country during World War II and was honorably discharged in 1946. Cecil was a Marksman and received the World War II Victory Ribbon, Good Conduct Medal, and the American Theater Ribbon.

He was united in marriage to Aline Adams on July 20, 1945. They made their first home in Stinnett, Texas before moving to Laverne and back to Forgan. Cecil owned and operated Mitch's Foods in Laverne for 25 years, retiring in 1974. After his retirement, he returned to Forgan to farm.

He was a member of the United Methodist Church of Forgan. He was also a past member of the Laverne School Board of Education, American Legion, Forgan Cemetery Board, Lions Club and Chamber of Commerce in Laverne. He was a volunteer firefighter on the Laverne Fire Department until his retirement. He was very patriotic and was proud to be an American. He loved being with his family and being around people. His employees at the grocery store were like his family. Cecil always loved being out with his cattle.

He is survived by one daughter, Sue Mitchell of Woodward; other relatives and many friends.

Cecil was preceded in death by his parents, his wife Aline in 1981, parents-in-law, and all of his siblings, Vernon, Lenos, John, Arlie, and Edna.

Memorial contributions may be made to the Toby Keith House in honor of Grace Martinez with the funeral home accepting the contributions.

Anybody can be a father but it takes someone special to be a Daddy.

Remembrances may be shared online at www.billingsfuneralhomewoodward.com
Published on July 15, 2019
To plant a tree in memory of Cecil R. Mitchell, please visit Tribute Store.

Plant a tree in memory
of Cecil

Restore the guestbook to view the 3 more posts by family and friends, and share a memory or message of condolence of your own.