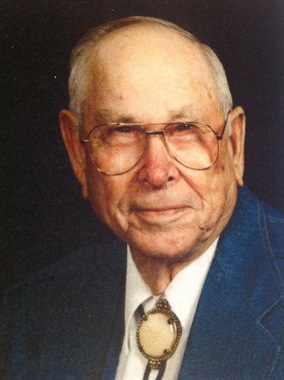 Back to Calvin "Bernie"'s story

Calvin "Bernie" Rutledge, 92 year old Woodward resident, passed away Tuesday, July 23, 2019. Funeral services will be held at 2:30 pm on Tuesday, July 30, 2019 in the Faith United Methodist Church. Burial will follow in the Mooreland Cemetery. Military Honors will be conducted by the United States Navy. Arrangements are under the direction of the Billings Funeral Home.
Calvin Bernard "Bernie" Rutledge was born in a two room farm house in Northwest Woodward County near Mooreland on May 12, 1927 to Thomas Henry and Clementine Bertha (Croisant) Rutledge. He was the 4th of 11 boys. After graduating from Mooreland High School Bernie joined the Navy on August 29, 1945. He was sent to San Diego for naval training where he became a member of Company 412. In December 1945, he was sent to Treasure Island in the Philippines on the "U.S. Admiral C.F. Hughes." Upon arrival to the Islands, he was assigned to L.S.T. #668 until March 1946. Then he sailed for China on L.S.T. #635. While in the Islands he took part in a big raid on an Island held by the Japanese. He sailed for home in June of 1946 and was honorably discharged from the Navy on July 2, 1946.
He married Josephine Maye Hillman on July 19, 1946 in Woodward. One daughter, Bernita Jo was born to this union.
He married Dorothy Mae (Mariner) Taylor on January 1, 1955 in Clayton, New Mexico. From this union he gained a step-son and daughter and three grandsons.
He married Lynetta (Thomas) Murray on May 30, 1998 at his home North of Woodward. From this union he gained three step-daughters and nine grandchildren.
He received the Junior Master Farmer Award when in high school at Mooreland. Through the years after being in the service he worked for USDA, Woodward Livestock Auction Company. Later he served on the Coop Board, Water Resources Board and the Woodward County Excise Board for over 30 years. He continued with his cow/calf operation for many years working along with his Grandson, Brett. Throughout his life he was a mentor to many young men teaching them how to rope cattle and rodeo, how to run a cattle operation and most importantly how to be a man. He was the family patriarch and his grandchildren and children looked to him for the inspiration to be the man he showed them how to be. He served as the Grand Marshall in 2018 Mooreland Homecoming Parade. He was an active member of American Legion Post 19.
Bernie was a man who worked very hard from sun up to sun down all of his life and he expected everyone else to do the same. He loved going to the coffee shop at United and seeing the guys and gals seven days a week.
He was preceded in death by his parents, only daughter Bernita Jo, her mother Josephine, and wife Dorothy, brothers Herb, Harold, Bill, Jim, Thomas and Ralph Rutledge.
He is survived by his wife of 21 years Lynetta Rutledge; three grandchildren, Ed Bardwell (Tammy) of Dallas, TX, Tracy Dargy (Glen) of Shellsburg, Iowa , Robin Podgorski (John) of Cedar Rapids, Iowa; eight great grandchildren; brothers, Albert Rutledge (Betty), Leroy Rutledge, Louis Rutledge, Jack Rutledge (Lorraine); two special grandsons Lynn Nelson (Regina) of Woodward, Oklahoma, Brett Nelson of Woodward, Oklahoma; step-daughters Brenda Sue (Rabe) Moody (Brian) of Perkins, Oklahoma, Leslie Carol (Rabe) Crenshaw (Jay) of Coyle, Oklahoma, Susan Anne (Murray) Denson of Cashion, Oklahoma and many nieces, nephews, other relatives and many, many friends.
Remembrances may be shared online at www.billingsfuneralhomewoodward.com
Published on July 26, 2019
To plant a tree in memory of Calvin "Bernie" Rutledge, please visit Tribute Store.

Plant a tree in memory
of Calvin "Bernie"

A place to share condolences and memories.
The guestbook expires on October 24, 2019.